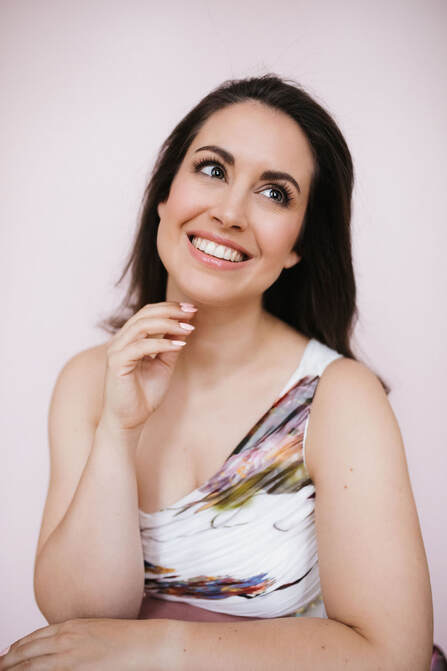 Carmen is a Dutch Musicalartist, Singer, Actress, Vocal Coach and Theatre Educator.
Growing up in the Netherlands she developed a passion for music and dance at an early age. Between the age of four- and twelve-years-old, Carmen took classes and developed her skills in ballet, jazz, singing and was part of a church choir. At the age of nine, she started taking piano lessons. At fourteen, she started preparatory training at the MusicAll-Factory in Tilburg (Netherlands) and developed her skills as a triple threat student very quickly. As a big theater fan it was the ultimate goal to combine her three biggest passions in one genre: Musical Theater.
In 2006, Carmen was accepted to the Fontys Hogeschool voor de Kunsten Dance Academy to study Musical Theater. During her final year in 2009, she joined the national tour of MAMMA MIA! as Ensemble/cover Lisa produced by Stage Entertainment Netherlands. Half way through the contract Carmen graduated and was part of the National TV-Talentshow OP ZOEK NAAR MARY POPPINS produced by AVRO TROS and Stage Entertainment Netherlands. Together with ten other women she competed for the lead in Disneys and Cameron Mackintosh's musical 'Mary Poppins'. As the youngest candidate, Carmen had to leave the competition after five live shows finishing sixth, and continued her run with Mamma Mia!.
In the fall of 2010 Carmen played her first lead as Mother (Lise van Dien) in the musical KRUIMELTJE. This typical Dutch show played at the Efteling Theater and in the fall of 2011 the production went on a national tour. One year later she got to be part of the original cast of Disneys THE LITTLE MERMAID​ as a swing.
Carmen's first job abroad happened in 2013 when she got to be one of the lead singers in SHOW ME at the Friedrichstadt-Palast in Berlin. A year later she was part of the Austrian cast of MAMMA MIA! in Vienna as a swing/cover Lisa, produced by the Vereinigte Bühnen Wien (VBW). In 2015 Carmen moved to Stuttgart to join the cast of Disneys TARZAN as ensemble/cover Kala and in 2016 she played in ROCKY as swing/cover Adrian, both productions produced by Stage Entertainment Germany.
After six years of long run productions in 3 different countries, Carmen decided to move from Amsterdam to Berlin and in 2017 she played the role of Anita in WEST SIDE STORY at the Staatsoper Hannover, which continued performances throughout 2018 and 2019. During the summer of 2018 Carmen played in two productions at the Luisenburg Festspiele in Wunsiedel: DAS DSCHUNGELBUCH as Raschka (mother wolf) and MY FAIR LADY as Ensemble. In the fall of that year she moved back to Stuttgart to be part of the original German cast of ANASTASIA as Tsarina/cover Countess Lily, where the show closed in October 2019.
In 2020 Carmen was seen as one of the Pop-choir (featered ensemble) in CHESS at the Mecklenburgisches Staatstheater in Schwerin. She was also stand-by as an emergency cover for the parts of Svetlana Sergievskaya and Florence Vassy.
In the Summer of 2021, Carmen played the part of Kate McGowan in the Open Air Production of Titanic​, also at the Mecklenburgisches Staatstheater in Schwerin.
Currently she is part of the cast of CHESS at the Stadttheater Bremerhaven as Pop-choir (featured Ensemble) and cover of both Svetlana Sergievskaya and Florence Vassy. Carmen has also been performing as a guest artist on several Cruise Ships from TUI CRUISES and for several years, Carmen has been working as a Vocal Coach.
​